Listen while you read: 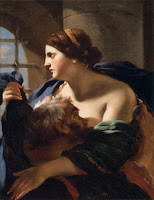 At any given time, I correspond with a half-dozen or so couples who are attempting to induce lactation, most of whom have no interest in a true adult nursing relationship. Instead they arrive at my blog having searched for information in the context of a desire to breastfeed a soon-to-be adopted child. Regardless of intent, the journey to lactation outside of pregnancy is a difficult one, and one that past conversations and experience tell me fewer than half will complete. The successful ones are most often those whose partners fully and joyfully participate.

The reasons the majority of couples discontinue an attempt to induce lactation don't vary that much. Most common is her complaint of sore nipples or extreme breast tenderness, followed by the sheer magnitude of the time commitment for either or both partners. One couple told me that the process of induction "seemed too weird" after they tried it for a day, and another said it made them feel "not as sexy" together (I'll never understand that one). One tearful and very disappointed woman said she simply couldn't tolerate the hormone changes her body began to undergo, and stopped despite her partner's reassurance and encouragement to continue.

As I reflect upon all of this, I realize that there is really no "best practices" guide available to couples who wish to induce lactation together. There is varied information regarding the effects of specific herbs or ways to obtain off-label medications, and random instructions as to a proper latch along with recommendations for breast pumps and marginal support groups, but no real-world, what-to-expect type of information. Thus my contribution to the ANR community today is to post a set of truths about induced lactation which reasonably begin to prepare a couple for the journey.

Note that none of my offerings will apply to all couples, all of the time, nor should they, as every couple and every circumstance is different. My words are, however, an honest reflection of the most common struggles and obstacles encountered in the journey to induce lactation, posted by an RN and certified lactation consultant who is utterly dedicated to the cause.

First, time is imperative. A couple should set aside between six and eight weeks to have the best chance of bringing in her milk. While some rare women have accomplished full lactation in four weeks, others need ten, thus six to eight is the most reasonable expectation.

Most protocols I've seen for inducing lactation suggest that a partner should nurse with a full latch for fifteen to twenty minutes per breast every three hours. It's my experience that this is too much in the beginning and doesn't adequately prepare her nipples for nursing, thus extreme breast tenderness results. Instead, for the first two weeks, nursing sessions should be spaced longer apart in hours to give her nipples time in between to rest, but they should likewise be longer in minutes per session. The stimulation necessary to initiate the first hormone spikes of estrogen, progesterone and prolactin is best balanced with the least nipple soreness with a commitment of thirty gentle minutes per breast, every four to six hours. After the initial two weeks, the estrogen/progesterone spike must be augmented by a steadier release of prolactin, which occurs in response to regular, prolonged nipple stimulation, and it is then that a regimen of fifteen to twenty vigorous minutes per breast every three to four hours best accomplishes this goal. Note that sometimes it is necessary for this protocol to continue for a long as six weeks, every day, around the clock, even if her body seems not to respond at first, and it is during this time that the couples I have worked with are the most easily discouraged.

The next factor in the successful induction of lactation is her body's release of oxytocin. Oxytocin is called many things...the love hormone, the cuddle hormone, the orgasm hormone, the childbirth hormone...and it is all of those things. It's also, however, a shy, tricky, demanding little beast which is quite easily affected by circumstance. If she's stressed, or fearful, or insecure, even at the most subtle of levels, oxytocin production will be inhibited and lactation will likely not occur, or occur with great difficulty.

In the real word, this means that her partner must make every effort to provide a secure and nurturing space within which the process of inducing lactation begins. Rather than one big, certain gesture, however, this is better received as a series of small efforts, tender reassurances and constant encouragement. Most women (myself included) feel very touchy and cuddly when the oxytocin/prolactin cocktail begins to surge; what isn't obvious, however, is that nature designs this reaction specifically to enhance oxytocin release. Skin to skin contact when not actively nursing, something as simple as stroking her chest and upper arms and neck and face when lying together in bed or even when watching television, can dramatically raise oxytocin levels.

It's also true that the body's major stress hormones, including cortisol, inhibit oxytocin release, thus it's important that her partner makes every attempt to shelter her from anger or even difficult conversations during these weeks, bringing her down gently when frustrations arise. With my patients giving birth, I often say that the quickest route to a Caesarean section is for the people surrounding the laboring mother to grow stressed and impatient, and I've been known to toss out of the room more than one person who failed to contribute to the gentle, nurturing, supportive cocoon I create there. It's much the same scenario when a couple attempts to induce lactation together.

It's worth a note here that the necessity for affection, touch, reassurance and nurturing to boost the release of oxytocin is also the reason that I don't recommend a couple use a breast pump more than once per day if they're attempting to induce. Sure, the mechanics are there, and the prolactin release from nipple stimulation will occur, even marginally, but without the corresponding oxytocin release triggered by her partner's affection, cuddling and touch, milk production and eventual milk let-down is difficult. Many people don't understand this and feel that the insert-part-A-into-slot-B technical approach of nipple stimulation, whether from a breast pump or by a partner, should be enough. The truth is, it usually isn't, and this remnant of evolution is simply the way Mother Nature designed women. When an infant is put to the breast, mother intuitively snuggles the infant close, creating skin-to-skin contact, and the baby reflexively reaches out to clasp the breast in his little hands, creating an oxytocin surge and helping to initiate milk let-down. Touch from a partner works the same way; a breast pump does not.

There are other variables which can significantly impact an attempt to induce lactation, including menopause, the use of oral contraceptives and some anti-depressants, and certain medical conditions such as polycystic ovarian syndrome, but because these topics are so vast, I have chosen not to address the specifics here. If any of you have a relevant question, I'd be glad to answer it by e-mail.

In my own experience, and in many of the couples I've worked with, the trust and intimacy which developed as they began the journey of sharing her breasts had no equal; time, nurturing, affection, communication and gentle support are the mileposts along the way.
Posted by Leftmost at 4:00 PM

Please remember to be respectful with your comments.

"We build everything in straight lines and rectangles and so on...wherever you see this sort of hard, geometric shape you know human beings have been around because they are always trying to straighten things out. However nature itself includes clouds, water, the outlines of continents, mountains, and biological existences, and all of them wiggle. Wiggly things are to human consciousness a little bit of a nuisance, because we always want figure them out." - The Tao of Philosophy, By Alan Watts________________________ "If a free society cannot help the many who are poor, it cannot save the few who are rich." — John F. Kennedy

Suggested sites: These sites are niether affiliated with, nor do they endorse Leftmostfew Blog.